We design, sink and rehabilitate shafts.

Any mineral. Any geology. Anywhere.

We are REDPATH DEILMANN.

Over 130 years of experience speaks for itself

REDPATH DEILMANN (formerly Deilmann-Haniel) is a highly experienced, successful, and innovative shaft sinking contractor, active in many countries. Our core business is shaft sinking and all services around shafts. Our clients are mining companies and tunnelling contractors. As a member of the Canadian Redpath Group which is operating on all five continents, one of the world leaders in mining construction, we design and construct mines, sink shafts and carry out service-, repair- and assembly works around the shaft in Germany, Europe, Northern Africa and the Russian-speaking countries.

Every shaft sinking project is a challenge, as no two projects are alike. Our clients demand new ideas and custom-made solutions – and that's exactly what we deliver.

Innovation is our tradition

In 2018 Redpath Deilmann (formerly Deilmann-Haniel) commenced work on a contract from Slavkaliy IOOO to construct two surface shafts for the new Nezhinsky potash mine in the Republic of Belarus. The project remit is to sink two 8.0-m diameter freeze shafts to a depth of some 700 m, this to be a fully-mechanised operation based around shaft boring roadheaders, rather than the conventional drilling and firing.

After completion of the foreshafts needed to set up the shaft boring machines the real sinking work with the two SBRs (shaft boring roadheaders) was able to commence in shaft number 2 in December 2018 followed by shaft number 1 in January 2019. The SBR machines were designed and built by Herrenknecht AG in Schwanau in close cooperation with Redpath Deilmann, also based in Germany. With some fine-tuning occasionally applied by the site crew to both the machines and the operating procedures the high-performing technology was soon interacting with an efficient workflow routine to the effect that by May 2019, and in spite of difficult geological conditions, the project set a new Belarusian shaft sinking record for metres sunk per month. The actual figures were 88 m and 83 m of bored shaft respectively.

Sinking work was then temporarily halted in the summer and autumn of 2019 so that 215 tubbing rings could be installed in both shafts, the rock wall behind being sealed by injection.

The sinking work was then resumed and in March 2020 the first salt formations were reached at a depth of nearly 500 m. The improved geological conditions, combined with a great team effort on the part of the construction crew, saw the Belarusian sinking record broken for a second time in April 2020. And on top of this, the 144,4 m of completed shaft easily exceeded the existing Redpath Deilmann record that had stood for nearly 100 years – thereby marking another famous milestone in the company's history (Figure 1). Both shafts have now reached the first planned inset levels (at a depth of about 670 m) and the next stage of the operation will involve the excavation and support of the landings.

The entire project is scheduled for delivery by mid-2022. After the shaft operations have been completed, which will include the construction and installation of the various insets, skip pockets, bunkers and guide fittings, there will still be several kilometres of underground roadway to be excavated in line with the contractual agreement. Finally, the surface installations can then be dismantled and the site handed back to Slavkaliy.

It is still too early to tell how the current SARS-CoV-2 epidemic will affect the work at the shaft site. As well as a large number of Belarusian and Russian staff the project also includes some 50 engineers and supervisors from the German parent company. The measures to be taken in order to prevent the spread of this new coronavirus are being clearly communicated and everyone knows what has to be done to protect themselves. The German personnel on site have shown great commitment with their continued support for the ongoing operations, notwithstanding the restricted opportunities available at present for returning home. In spite of the corona situation the project team therefore remains fully manned and all involved are as healthy and motivated as they were on day one.

So with this in mind: Glückauf, good luck and stay healthy! 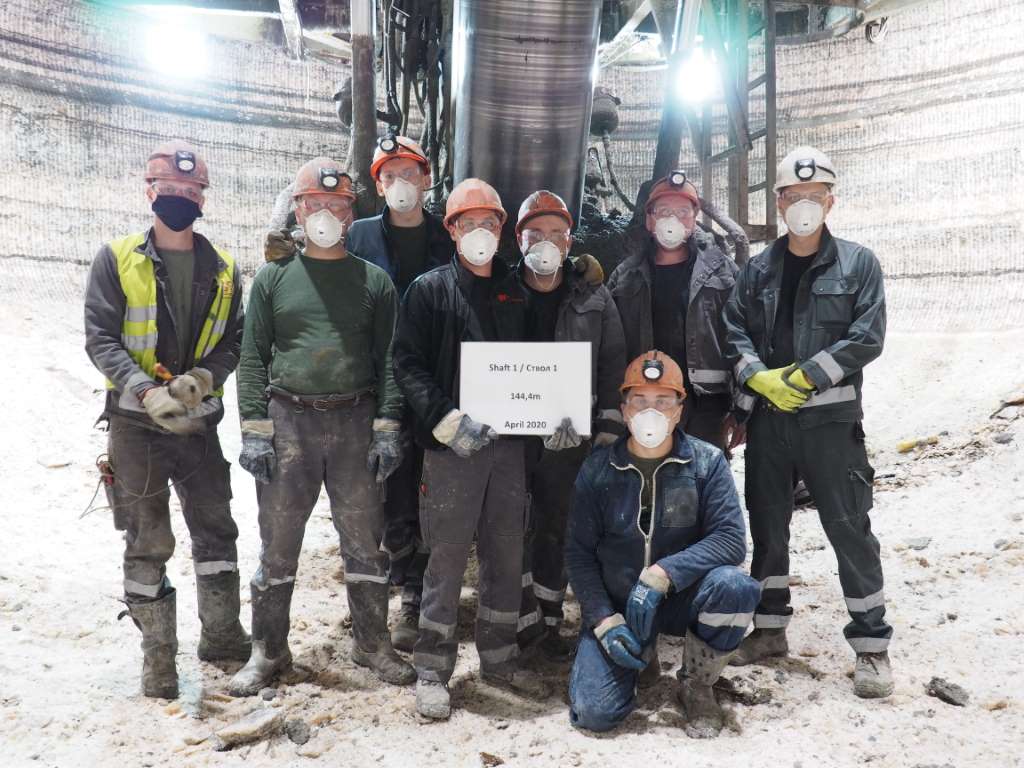